Are They Bees or Wasps? 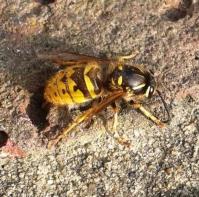 Wasps are slender, with a particularly narrow waist. They have a yellow and black striped abdomen (rear section), and wings which are attached at the thorax (mid section). Their bodies appear shiny and smooth, and their six legs are extremely slim. They have a sting on their abdomen which has a venom sack on the end of it. They feed on invertebrates such as flies, spiders, ants etc. Wasps make their own nests out of chewed up tree bark that they mix with their saliva, creating a paper-like substance. They normally make these nests in remote places, and seem to favour roof spaces, sheds, dormer windows and cavity wall air bricks. If insects are flying continually to and from a certain spot, they are very likely to be wasps. Wasps can sting, and inject the venom into the skin of their prey. They can pump the venom, then remove the sting and fly away. You should never block up a hole that you think is a wasp nest, as this will aggravate them. Please call us on 01903 737755 to arrange an appointment for the nest to be treated professionally by one of our Pest Control Officers. 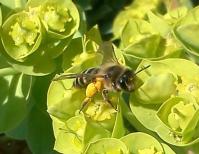 Honey bees are plump insects with hairy bodies, and fat legs. They have a a picture of a honey bee on a plantbrown and yellow striped pattern, and are much less vivid in colour than wasps. They also have wings and a sting in their tail. Bees feed on nectar and pollen, and use their stores to create the waxy combs they form their hives with. Bees usually nest in holes in trees, buildings or the ground. If you see a large ‘ball’ of insects either flying, or clustered in a hedge or bush they are very likely to be honey bees. Like wasps, bees can also sting, but bees are unable to remove their stinger, which is attached to their abdomen. When they fly away, they leave it behind, and the bee eventually dies. Bees should be left undisturbed. They swarm as part of their reproductive cycle, and will only stay in one place for a short amount of time. If they do remain in the same place for a prolonged period of time, please contact us on 01903 737755 and we may be able to put you in touch with a beekeeper who can come and collect the swarm. 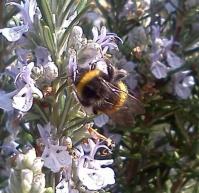 Bumble bees are quite large, about the size of a two pence piece. They appear to be furry, and have vivid yellow and black stripes across the width of their body, with either a white, yellow or orange bottom. They have earned the name ‘bumble bee’ because of the noise their wings make when they fly. They generally build their nests in grass or hedgerows. Bumble bees generally do not sting, but may do if they are provoked, so they are best left undisturbed. They are becoming a rare species, and are very important to food and crop production as they help pollenation. Neither Arun District Council nor a beekeeper should be contacted in the event of seeing a bumble bee, as we will not treat or remove them.