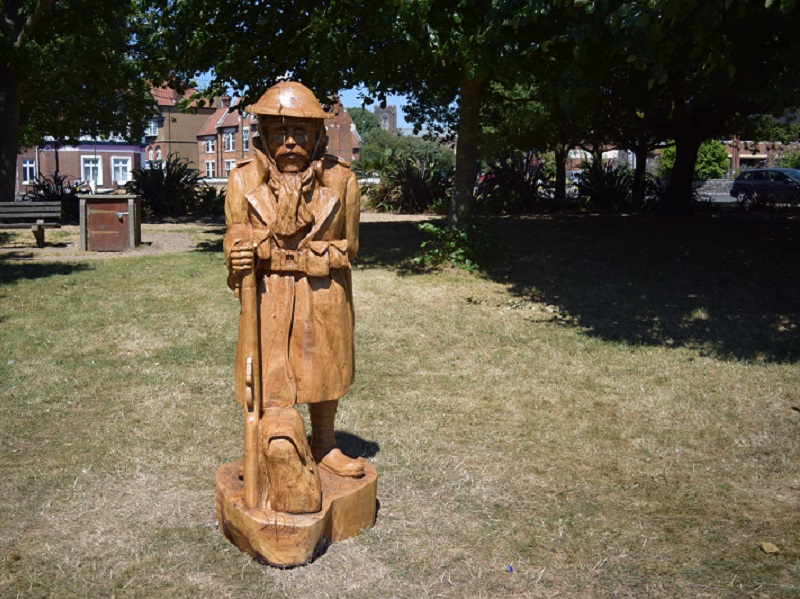 Arun District Council has embarked on a series of projects to mark the Centenary [2014-18] of First World War.

Across the district, 18 wild flower poppy meadows have been sown in tribute to those who fell during the Great War.

Also on a floral theme, two new carpet bedding displays have been created next to the Littlehampton War Memorial and a third at Marine Park Gardens in Aldwick.

In Caffyns field next to the War Memorial a sculpture of a lone wooden soldier stands proudly in place.

Created by chainsaw artist, Simon Groves, the piece was commissioned by Arun District Council and pays respect to fallen comrades. An official presentation ceremony is set to be held closer to Armistice Day in November. Lamppost banners throughout the district have been proudly displaying poppy banners.

Councillor Paul Wotherspoon, Arun District Council’s Cabinet Member for Neighbourhood Services, said: “This is a significant year, marking as it does the end of World War One in 1918. Therefore, it is incredibly important that we commemorate the Centenary year with these fantastic floral tributes and a string of events to recognise the sacrifice made by those who gave so much during the Great War.”