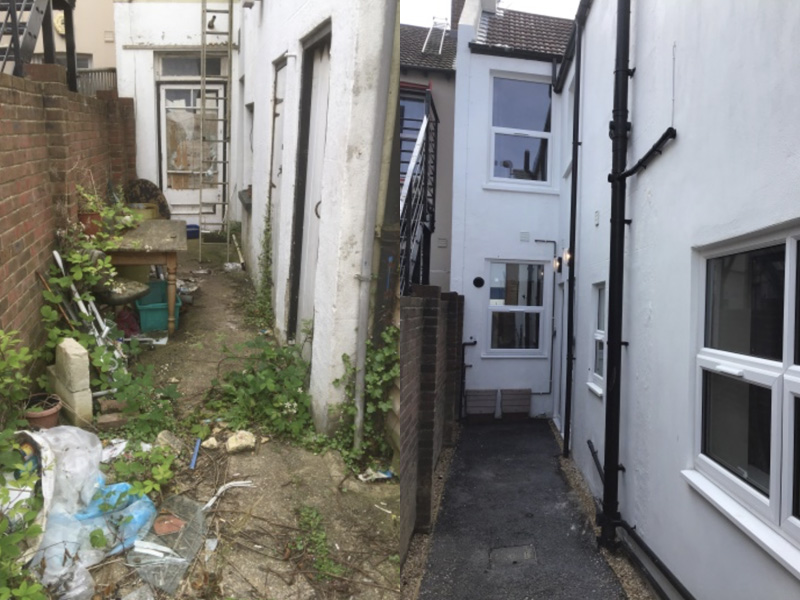 A derelict two-bedroom flat and the commercial unit located on the ground floor of the same building has been refurbished and extended by its new owner, to create accommodation for local families in housing need.

The building, which has been empty since 2010, will now become available housing for Arun District Council and the Housing Options Team can now let them out to create living spaces for up to four separate families.

Empty homes are often properties which cause ongoing concerns for the community which was the case in this instance. The Council received a number of complaints from the public due to the poor condition of this property. There were numerous calls to the police due to the anti-social behaviour the property attracted and continued unauthorised access from drug users.

Despite many attempts to engage informally with the previous owner to encourage them to begin work on the property, negotiations proved unsuccessful. No progress was made to improve conditions, make the property safe and bring it back into habitable use within a reasonable amount of time, therefore the Councils Empty Homes Officer took formal enforcement action.

In August 2016, an Improvement Notice under the Housing Act 2004 was served on the legal owners. The property was sold to a company who began the extensive renovations, creating the four separate self-contained flats.

Arun District Council’s Empty Homes Officer has been to visit the property and can confirm that the renovations have been completed and the Improvement Notice fully complied with. These homes will now be occupied by local people in housing need.

If you know of an empty property, or you require financial assistance on an empty property you own please contact Helen Stevens, Empty Homes Officer at Arun District Council, by phone on 01903 737788 or by email on helen.stevens@arun.gov.uk or visit www.arun.gov.uk/empty-properties