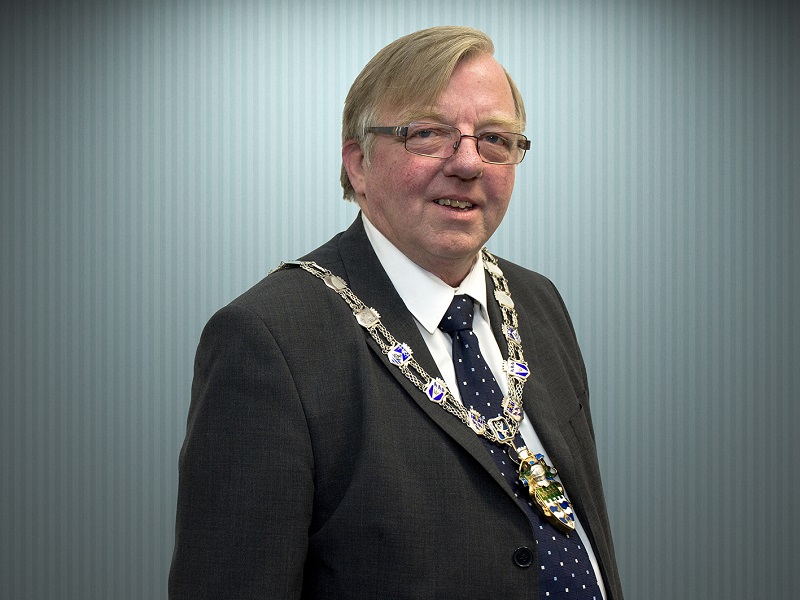 Councillor Alan Gammon, Brookfield Ward, was elected as the new Chairman of Arun District Council at the Annual Council Meeting on 16 May 2018.

Councillor Gammon received the chain of office from outgoing Chairman Cllr Mrs Jacky Pendleton who received a vote of thanks for her contributions as an ambassador for the Arun District, and also for her fundraising work in support of her chosen charities, Home Start Arun and ChallengeU, with a total of almost £4000.

At the Chairman’s reception that followed the inauguration, Cllr Gammon thanked his guests for attending and announced that he will be supporting Littlehampton Shopmobility and Bognor Regis Shopmobility during his year as Chairman.

As Trustee for Littlehampton Shopmobility, both charities and the services they provide are very close to Cllr Gammon and the raffle that took place at the reception started the fundraising off with a healthy total of £400 raised. Raffle prizes were generously donated from many local businesses including: The Arun View; Arundel Castle; Arundel Lido; Clarified Extensions and Beauty; Littlehampton Tyre & Exhaust Centre, Haskins Garden Centre; Morrison’s; The Fish Factory, The Regis Centre and Reynolds.

As well as supporting Shopmobility, Cllr Gammon is very keen to raise the profile and awareness of Sussex Day, celebrated annual on 16 June.  At the reception Cllr Gammon announced that Sussex Day will be marked in Arundel, Littlehampton and at Armed Forces day in Bognor Regis. Sussex flags will be flown and the Sussex Day declaration will be read at a number of events throughout the district.

Councillor Gammon is a well-known local figure and has a wealth of local government experience with service as a Littlehampton Town Councillor, twice Town Mayor and of course as a District Councillor. Alan is also a prominent supporter of community groups and charities in the district so is very well equipped for the role of Chairman.

Cllr Gammon said: “It’s been a pleasure to work as Vice Chairman with Cllr Mrs Pendleton for the past year and step in when required”.

“I’m looking forward to my year as Chairman, representing this District at a variety of events and meetings as a Civic Ambassador, raising funds and awareness for Shopmobility and also to being a fair Chairman of Council meetings and matters.”