Our website is in beta testing. To find out what that means and to give us feedback, please visit our beta website page. 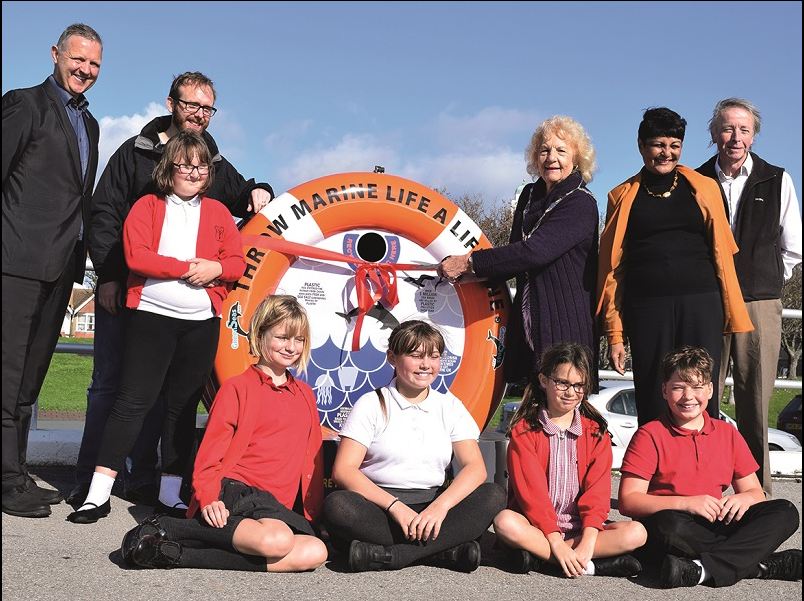 An innovative rubbish bin designed to encourage people to cut plastic pollution of the seas and oceans has been unveiled on Bognor Regis seafront.

The Chairman of Arun District Council, Councillor Jeanette Warr, and the Council’s CEO Nigel Lynn met Fazilette Khan, founder of the GreenSeas Trust, to test out the bin which is shaped like a life belt.

They were joined by pupils from Edward Bryant School, ward councillors, council officers and a representative from cleansing contractors, Biffa.

The resin used to make the BinForGreenSeas has recycled PET plastics as one of its key components and is made from the equivalent of 450 plastic drink bottles.

The eye-catching receptacle is designed to make popping rubbish in the bin more fun and carries the important message, ‘Throw Marine Life a Lifeline’.

The long-term aim of the project is to prevent plastic waste from finding its way into the sea by making the disposal of litter a more conscious act.

It follows on from the successful Beauty of the Beach summer campaign with Southern Water, and the Council hopes the bin will further encourage people to keep the beach cleaner.

Councillor Dan Purchese, Arun District Council’s Cabinet Member for Neighbourhood Services, said: “Rubbish, and plastic in particular, has a major impact on beaches across the district so we’re hoping that this bin will serve as a reminder to visitors to dispose of their litter carefully.”

The BinForGreenSeas project is organised by the London-based charity, GreenSeas Trust, founded by Fazilette Khan who has spent most of her career as a Merchant Navy officer seeing first-hand how our littering habits have impacted our oceans.

Fazilette said: “Arun District Council has been a great supporter of the project since the beginning. The BinForGreenSeas acts as a visual cue to make people realise the consequences of irresponsible littering and the impact this has on all of us."

The bin was designed by Emily Hodgkinson and George Davis, students at the University of East London.