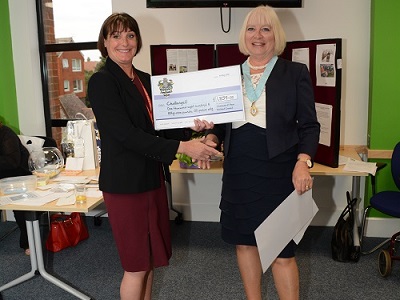 Following the Annual Council meeting on 16 May 2018, having handed the Chairman’s chain of office to new Chairman, Cllr Alan Gammon, Jacky Pendleton welcomed guests to a reception where she presented the funds raised over her Civic year to Home Start Arun and ChallengeU.

Cllr Mrs Pendleton has worked tirelessly throughout the year to raise awareness and money to benefit the two charities. This has included a raffle, a Civic Service at Arundel Cathedral, a Masquerade Ball and on 11 May Jacky faced her fear of heights and successfully tackled the zip wire at the Lodge Hill centre where the ChallengeU programme is based. This event alone raised £900 of the grand total of almost £4000 that Jacky divided between the charities. In fact, additional funds were still rolling in as the cheques were presented on Wednesday evening!

Cllr Mrs Pendleton said “It has been an absolute privilege to serve the Arun district as Chairman this past year and I have been honoured to be able to attend some fantastic events and meet so many new and interesting people. Raising money for my chosen charities has been wonderful and I would like to thank everybody for the support they have shown my fundraising efforts and also my work as Chairman.”

“I congratulate Cllr Gammon and Cllr Dillon on their appointment as Chairman and Vice Chairman for the coming year.”