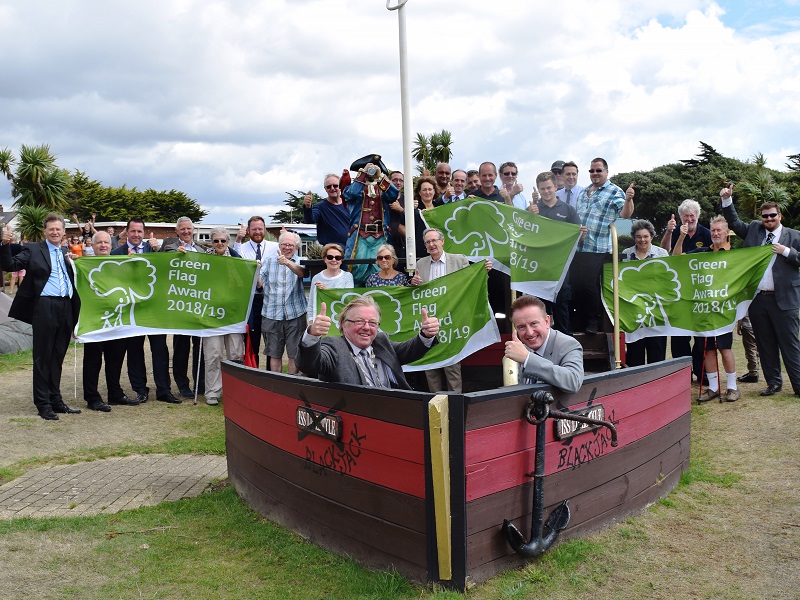 Today, a record number of parks and green spaces will collect a Green Flag Award.

Mewsbrook Park and Norfolk Gardens in Littlehampton, together with Marine Park Gardens and Hotham Park in Bognor Regis, have been recognised by the Green Flag Award Scheme as four of the very best in the world.

These four parks are among a record-breaking 1,883 UK parks and green spaces that will receive a prestigious Green Flag Award this year – the mark of a quality park or green space.

This international award, now into its third decade, is a sign to the public that the space boasts the highest possible environmental standards, is beautifully maintained and has excellent visitor facilities.

Councillor Paul Wotherspoon, Cabinet Member for Neighbourhood Services, said: “Arun District Council first received a Green Flag Award for Mewsbrook Park 14 years ago, since then we have successfully retained awards for not only Mewsbrook, but also Marine Park Gardens and Hotham Park. In 2018 we are absolutely delighted that Norfolk Gardens has received a Green Flag Award for first time.

“We know how much quality green spaces matter to residents and visitors, and this award celebrates the dedication that goes into maintaining our parks and greenspaces to such a high standard.

“Being recognised by this award scheme is no mean feat. It is the sum of significant efforts made by volunteer groups, specifically Hotham Park Heritage Trust, Friends of Mewsbrook Park, East Beach Residents’ Association and Friends of Aldwick Parks. Hotham Park and Mewsbrook Park Cafes work tirelessly with volunteers and Arun officers to ensure the parks are the best they can be.

“Both the Littlehampton and Hotham Park Miniature Railways offer that often unique seaside attraction which brings visiting tourists to the area.

“Our thanks too must go to our contractors Tivoli Group Limited, specifically to the site-based staff who do so much in maintaining these wonderful parks. Their investment at Wildforest Falls (Hotham Park) and Buccaneer Bay (Norfolk Gardens) Adventure Golf courses have also contributed towards achieving this recognition.”